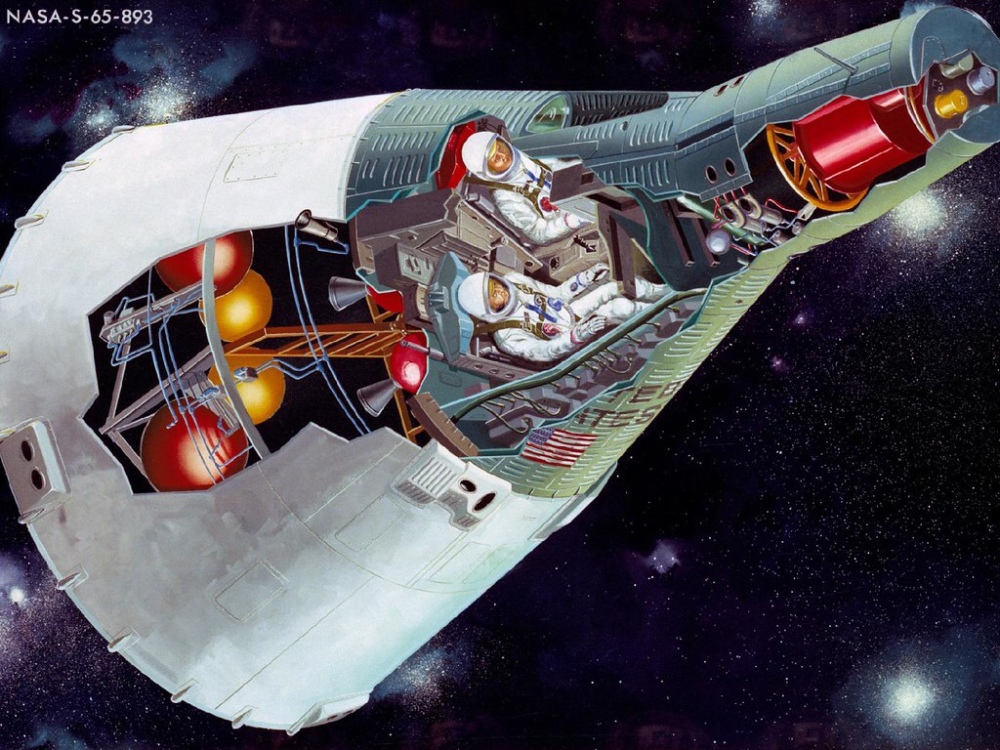 NASA’s Project Gemini, which launched twelve spacecraft into Earth’s orbit between April 1964 and November 1966, was an intermediate step in the Apollo program’s ultimate goal of achieving a moon landing. The information and experience gained from the Gemini missions was vital for the success of future Apollo missions. 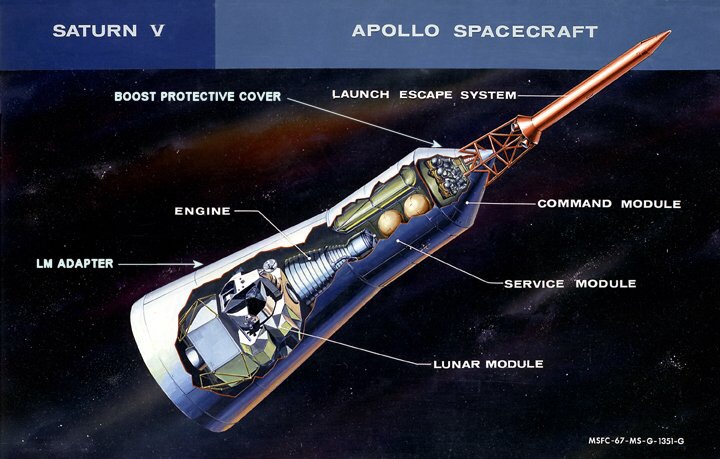 Astronauts would be forced to endure prolonged periods of weightlessness, as well as perform a series of difficult rendezvous, docking, and reentry procedures, all with minuscule room for error. To ensure the success of this mission, NASA needed to demonstrate that astronauts could endure lengthy spaceflights, maneuver spacecraft to rendezvous and dock, perform tasks in the weightlessness of space, and reenter Earth’s atmosphere at a predetermined location. 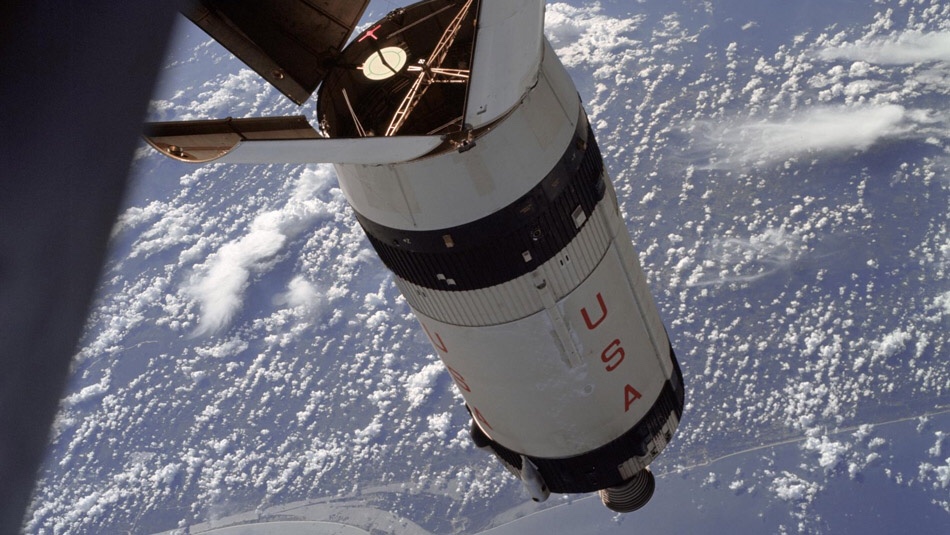 Project Mercury, which launched NASA’s earliest space flights, proved the human body could tolerate the rapid acceleration of a rocket launch, but achieved little else. Mercury’s spacecraft carried just one astronaut, and could only make basic maneuvers. Furthermore, Mercury 9, the final and longest flight of the Mercury series, lasted only 34 hours, significantly shorter than the eight-day minimum of a lunar voyage. It was clear that NASA still had much to do before attempting a moon landing.

The Gemini Project expanded upon the goals and limitations of the Mercury program, providing the frameworks necessary for the Apollo project. Gemini’s spacecraft made several improvements on the Mercury capsule; it was expanded to fit two astronauts, was capable of changing its orbit with thrusters, could link with other spacecraft, and offered more precise reentry and landing capabilities. With Gemini, NASA prepared to take the next step towards their goal.

The first two Gemini missions were unmanned tests carried out on April 8, 1964 and January 19, 1965 to determine if the spacecraft was viable for human operation. These tests evaluated launch systems and the structural and operational integrity of the Gemini spacecraft. Gemini 1 tested how accurately the Titan 2 rocket could place the spacecraft into its target orbit, and Gemini 2 tested the efficacy of the reentry module’s heat protection. Both missions were considered successes, and

the Gemini spacecraft was approved for crewed missions. 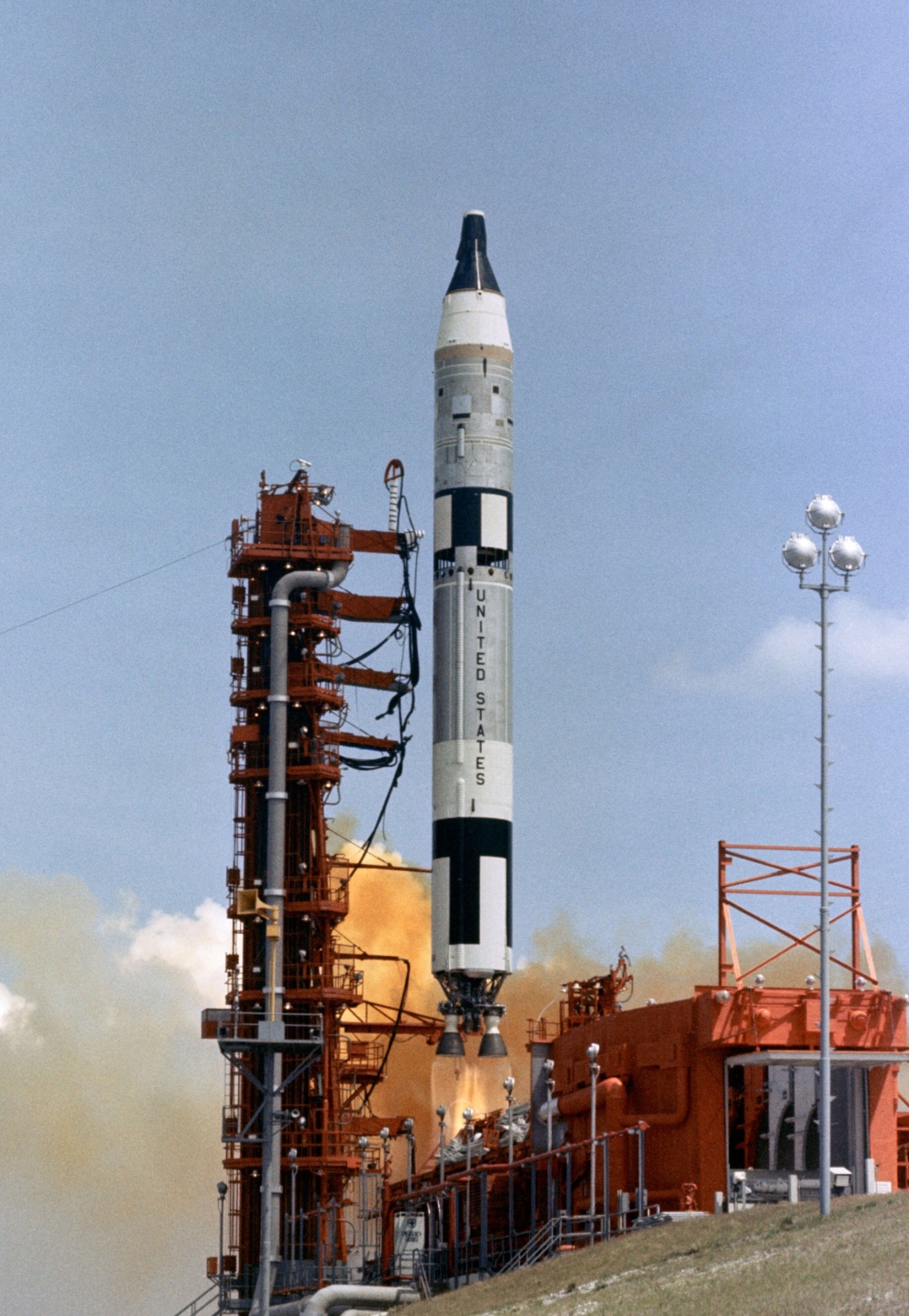 Gemini 3 was the first manned mission of the Gemini Project. It launched on March 23, 1965, and was piloted by astronauts Virgil Grissom and John Young. Grissom and Young orbited the Earth for five hours, evaluating the feasibility of Gemini’s two-man design and taking photographs from orbit. Grissom’s use of Gemini’s orbit attitude and maneuver system (OAMS) marked the first time astronauts deliberately altered the orbit of their spacecraft.

Gemini 4, manned by James McDivitt and Edward White, lasted from June 3 to June 7, 1965, a period in which they orbited Earth 62 times. This mission received extensive television coverage, being broadcast to millions of people across America and Europe. During the mission, White became the first American to perform a spacewalk, referred by NASA as an “extravehicular activity”. Attached to the spacecraft with an 8 meter tether, White used a hand-held gas gun to propel himself through space. His spacewalk lasted a total of 23 minutes. 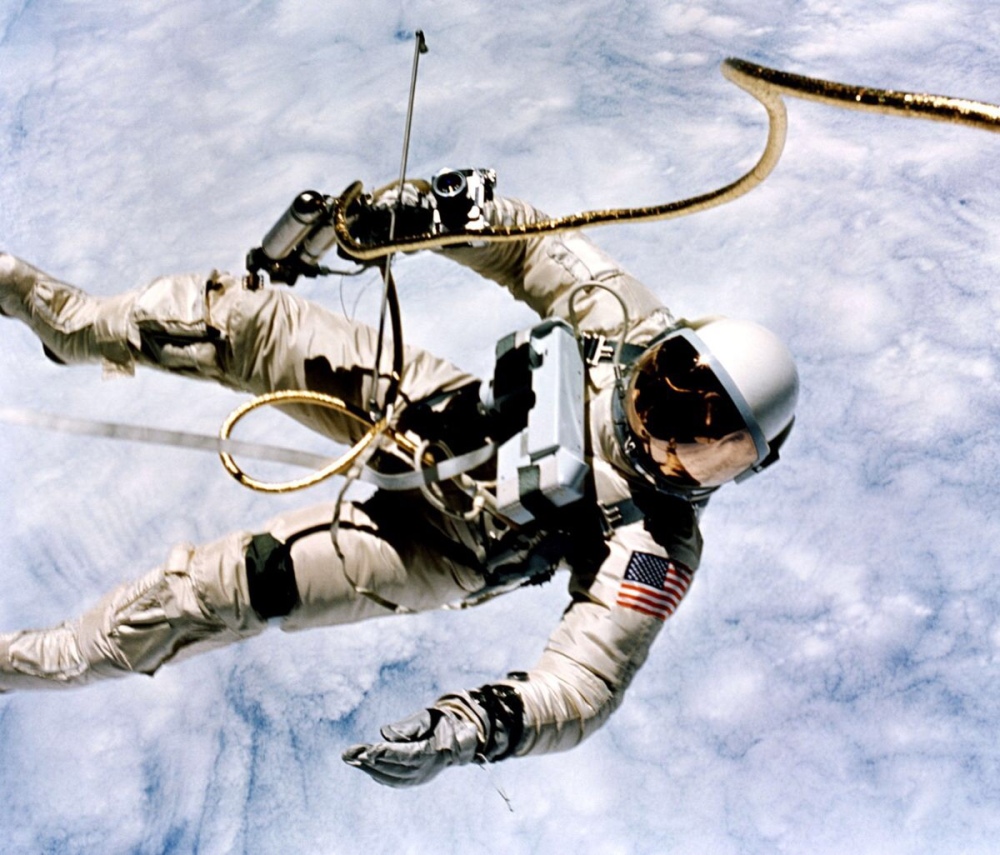 Gemini 5 was launched on August 21, 1965, with the primary objective of testing rendezvous procedures with a target vehicle. The mission was manned by Gordon Cooper and Pete Conrad, and lasted for a total of eight days. A minor technical malfunction prompted them to abandon the planned rendezvous exercise, and they performed a simulation exercise instead. Although they were unable to rendezvous with the target vehicle, the mission’s eight-day length demonstrated that humans were capable of adapting to extended periods of weightlessness.

Gemini 7 and Gemini 6A were launched in conjunction with each other. Gemini 7 was launched first, on December 4, 1965, carrying astronauts Frank Borman and Jim Lovell. Gemini 7’s flight period was scheduled to last fourteen days, the maximum time required for a moon landing. Gemini 7 also marked the first time American astronauts removed their spacesuits during a mission. Gemini 6A launched eleven days later, on December 15, carrying Walter Schirra and Thomas Stafford. The two spacecraft rendezvoused with each other, and flew in formation for about 20 hours. Gemini 6A returned to Earth the next day, while Gemini 7 remained in orbit until December 18, 1965. Gemini 7 proved that astronauts could function optimally after up to two weeks in space. Although Gemini 8 included the first ever docking in space, a thruster malfunction almost resulted in disaster for the crew. Manned by David Scott and future Apollo 11 astronaut Neil Armstrong, Gemini 8 launched on March 16, 1966. Shortly after docking with the target vehicle, their spacecraft began to spin out of control, and when Armstrong detached from the target vehicle, the Gemini capsule began to spin even more violently. About to lose consciousness from the rapid spinning, the astronauts used the reentry control thrusters to stabilize the spacecraft, but were forced to make an emergency splashdown afterwards. While the rest of the mission’s planned objectives had to be abandoned, it did mark the first successful rendezvous and docking between two spacecraft. 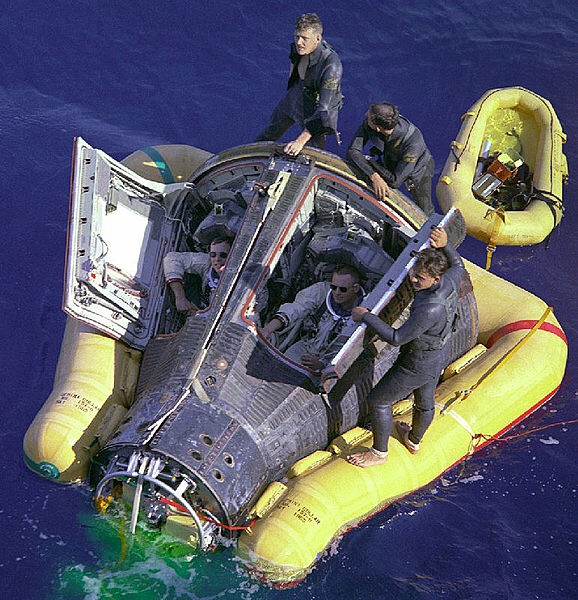 Gemini 9A launched on June 3, 1966, carrying astronauts Tom Stafford and Gene Cernan. Several mission objectives could not be completed due to unforeseen difficulties. The target vehicle’s dock would not open, and Cernan expended a life-threatening amount of energy trying to operate a jet-powered backpack, the Astronaut Maneuvering Unit. The mission’s failures demonstrated that astronauts would need to better manage their energy during spacewalks.

Gemini 10, launched with John Young and Michael Collins on July 18, 1966, climbed to a record altitude of 458 miles above Earth. The astronauts were able to successfully dock with the target vehicle without complication, and landed back on Earth uneventfully after three days. The design of the spacecraft and technique of the astronauts were showing gradual improvement.

Gemini 11 would shatter Gemini 10’s record, rising to a height of 853 miles, an altitude that would not be exceeded until Apollo 8. The mission was launched on September 12, 1966, carrying astronauts Pete Conrad and Richard Gordon. They performed an artificial gravity experiment by tethering their spacecraft to the target vehicle and allowing the two vessels to rotate. 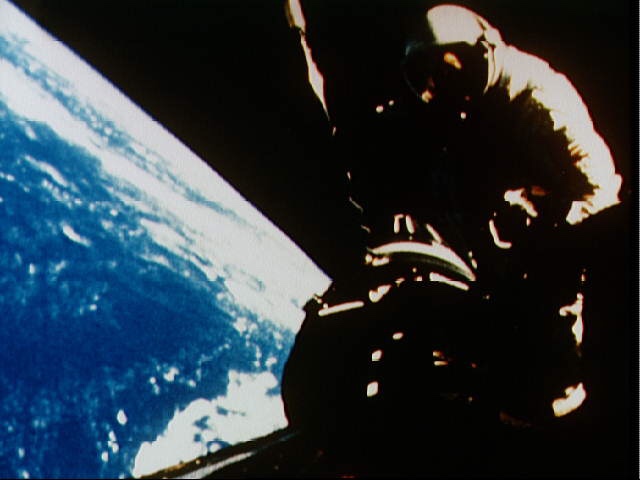 Gemini 12, the final mission in the series, was launched on November 11, 1966. The mission was manned by future Apollo astronauts Jim Lovell and Buzz Aldrin. During Gemini 12, Aldrin was able to complete several maintenance tasks during an extended spacewalk by taking breaks and utilizing efficient movements. Aldrin’s spacewalk demonstrated the most effective method of working in space without expending too much energy.

After Project Gemini’s final launch, planning for the Apollo missions began two months later. With Gemini’s success, NASA was equipped with the knowledge and experience necessary to complete Apollo’s lunar landing missions. The program made possible President John F. Kennedy’s vision of putting a man on the Moon before the end of the decade. 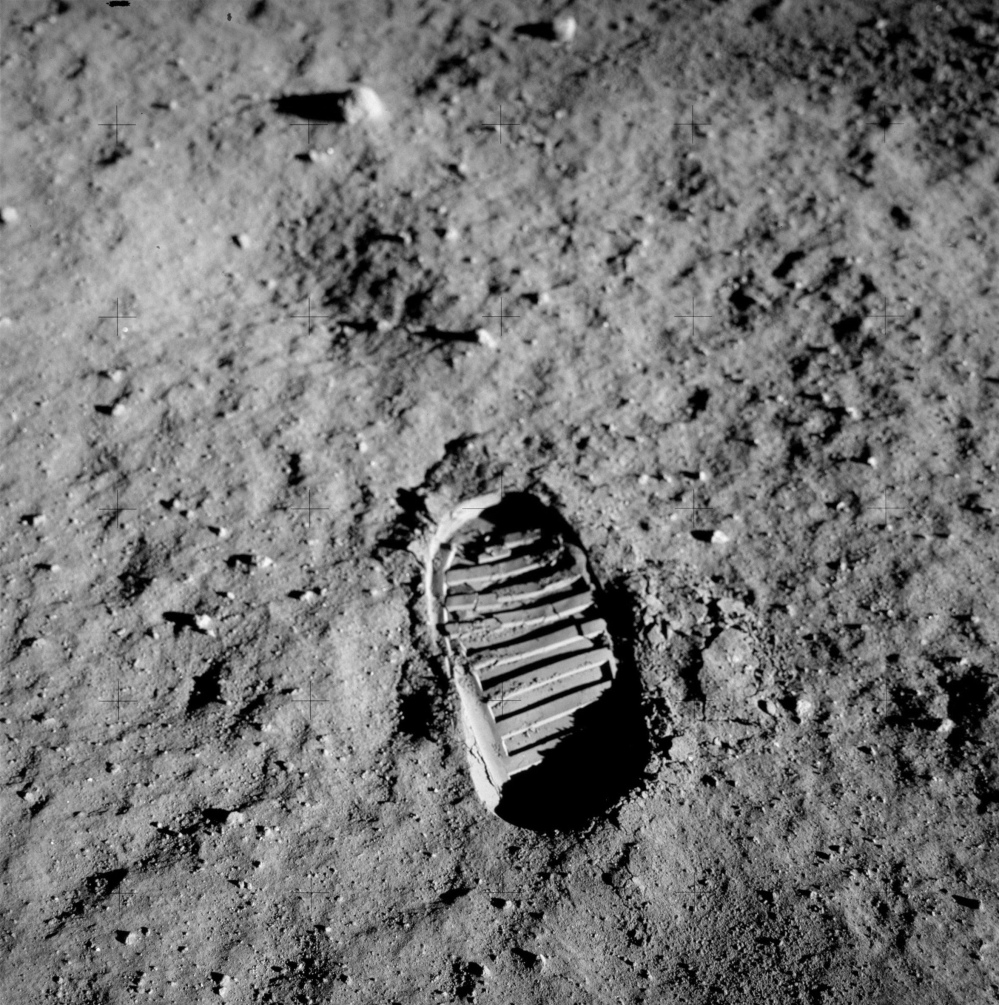