Castles were impressive structures by nearly all definitions and a key aspect of medieval society. They served as miniature administrative offices, defensive positions and markers of realms.

How they were built is truly astonishing, and required huge amounts of manual, human labour without necessarily advanced measuring equipment or machinery.

Additionally, they were costly to their owners – to build, maintain and protect.

Widespread, popular construction of forts for defensive purposes really set off in the Saxon golden age, when threats from neighbouring parties proved to be at the level where more than an army was needed to ensure the security of a domain.

The Normans, to name one group in particular, were excellent castle builders, since they brought the art and skill of building castles to Britain. Castles evolved over time, from simple motte and bailey forts to towering, crenellated stone structures. Over time, builders and architects incorporated advanced opposing features such as murder holes and portcullises into their designs.

Typically, they took between a year and ten years to produce, while some grander buildings could take towards twenty.

The types of resources for building were selected by local availability, as were the workforces.

Wood-cutters were hired form nearby villages to help fell trees for timber and carve out wood into planks that could be used for measuring, scaffolding and framing.

Using long and laborious processes, stone – often granite, limestone or sandstone – was cut and chiselled into bricks, and believe it or not, medieval construction workers were pretty good at getting it right.

These bricks would be transported from the quarry – which was often established near the building site – to the castle usually by wagon.

Workers dug shafts into the ground then used these to begin levelling out an area around the bedrock where either the ground would be eventually flattened or rubble would be piled on top. So a relatively stable surface would be provided.

The chief specialist conducting the work on the castle would have access to surprisingly detailed plans outlining the height and thickness of walls, where to provide space for a gateway or entrance, and which bits would require extra precision and dedication.

Timber frames were laid down on the work surface and stone blocks were lifted onto them. A kind of mortar made with water, lime and soil was used to hold the bricks together.

Scaffolding was also hammered into the walls so that materials could be taken to the top.

In other cases, advanced mechanisms such as hamster-wheel driven cranes would be used to slowly and precariously lift slabs up. 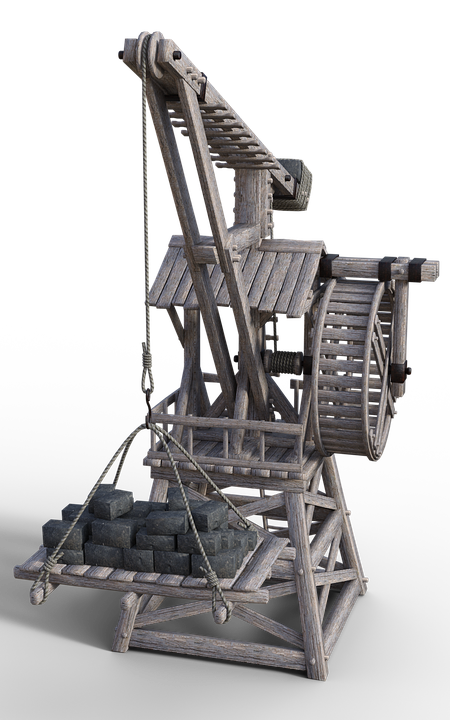 Due to the use of these machines, large quantities of strong, flexible rope was needed. Rope was twisted from materials such as hemp and sinew by connecting it to an axel on a wooden stake. By spinning the cords they would be intertwined into a stronger, combined length.

The central keep, probably the most important part of the castle, would be surrounding by concentric (curtain) walls of great thickness and height. Architects would learn to make these crenellated, so guards walking the walls would have areas to hide behind in the event of a trebuchet bombardment or archer attack.

In this same way, cross shaped arrow slits, or loopholes, were dug into the towers so that soldiers within the walls could fire out without the risk of being easily shot back at.

Winding staircases were especially difficult to design. They consisted of one central column towering up through the centre, which was made by piling many large, cylindrical blocks upon each other.

More curved slabs were then added around the outsides, cut perfectly into circular shape by the use of knotted roles for measuring distances. It was absolutely essential that this process was perfected.

A huge wooden wheel would be equally divided up into segments. Stone would then be cut with the bottom of the blocks measuring to the circumference of the segments, but stretching out wider the taller it got. Therefore the stone slabs outer circumference was longer than the inner one, and an arch piece would be made.

Wooden templates were cut into boards, and this marked the basis for sculpting the right piece of stone.

Deep moats, on some occasions spiked trenches, and a large, elaborately decorated great hall were also worthy additions to a castle.

To make the insides appear more attractive, and to radiate heat back into the castle, the inner walls were whitewashed with a bright paste. There have been times where the outside of a castle was also painted, but this is very rare.

Perfectly baked tiles were made inside a furiously hot furnace. This melting pot was covered by mounds of dirt and rubble so that the heat was concentrated in the centre. Cooking a tile to the right colour and brittleness was an incredibly difficult task.

There was almost certainly a very high demand for skilled blacksmiths, as tools used by the workers needed relentless sharpening. Moreover, when arming the garrison of the fort, crossbow bolts, swords and arrowheads would be needed in large quantities.

Contrary to the belief that medieval castles were built by lowly peasants, they were instead worked upon by skilled groups of blacksmiths, architects, artists and builders.

Therefore castles were hugely expensive and a wonder to behold. Building one in the Middle Ages was a costly and lengthy process, but certainly well worth the effort.

King Henry I spent a considerable cut of his royal revenue fortifying and furnishing the impressive Dover Castle.

The construction site must have been a very busy centre. Small villages were often established around the fledgling castle and contained mills, carpenters’ houses and the furnaces for baking the tiles.

2 thoughts on “How to build a medieval castle”