Carthage – the crucial Mediterranean trading city in Tunisia – has, for a short period of time, had peace with its Roman enemies. However, this is only a playful grace period, as neither side intends to continue this truce. Hannibal, the greatest warrior in all of Europe, is no exception. Vowing to never forgive the Romans for their awful treatment of Carthage and astonishingly unfair terms of surrender, he fumes his way into the Second Punic War, conducting the greatest North African army in history so far and eventually causing the most terrible military failure Rome has ever suffered.

Hannibal first confronts the organised and well trained Roman army at Ticinus, but despite his foes’ ferocity, they are no much for his cavalry and war elephants, which completely crush the enemy.

After a few successes in defeating the Romans, a large population of Gauls and Spaniards realise that they all have a common enemy – Rome. So they choose to let themselves be led by the legendary Hannibal, who has decided that the best way to win the Second Punic War is to go straight to their opposing city directly and launch a pitched battle so that the Romans can be gotten rid of as soon as possible. The newly founded army builds quite a size, with about ten thousand cavalry and infantry units from many different nationalities.

In 216 BCE, they arrive at Cannae in South East Italy and first catch sight of the all-out hostile army that has been arranged against them. Although his competitor’s forces have nearly twice as few horses as he does, Hannibal discovers that he is outnumbered 7 to 4, and probably outgunned as well. Contrary to the Carthaginian troops, which are of a wide variety, the Romans consist mainly of well trained heavy infantry and a third of the eight legions that have been dispensed are war veterans, the experts in their field.

These linearly organised and powerful soldiers expect the centre of Hannibal’s formation to be the weakest, therefore they plan to push forwards and drive their opposition into two halves, which can be cut off from each other and destroyed individually. Gaius Terentius Varro, who is consul of the army, for some reason pulls his rectangular formation closer together and increases the depth of his units. Maybe he thought that with a dense strength he could absolutely smash through the Carthaginian ranks and use sheer forwards force to win the battle.

On the other hand, the Carthaginians form themselves into a crescent formation, with the peak facing the enemy. Left and right flanks well defended, Hannibal will guide the middle point, as they were the ones who will first smash into the Romans – so they therefore require the most encouraging. Cruelly, the plot is to make this section seem really weak so that Varro will see it as a target. Way is to be given to the Roman offense so the flanks can fold around them and trap the enemy army. 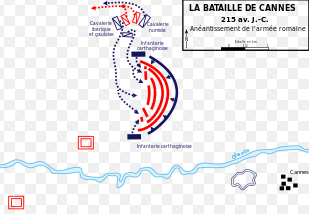 When the battle starts, Carthaginian cavalry collides with Varro’s cavalry and they are promptly obliterated by Hannibal’s charge. Meanwhile, Varro orders an advance and his heavy infantry, which has hardly any space to move, begin to run towards the Africans, and desperate fighting begins. Things turn bad when the Carthaginian strategy starts to work – the wings of their army close in around the centre of the Romans, who have pushed far into the middle of the action. With little space to fall back into, both sides are swiftly closed up and the outer lines of infantry are torn down by the Africans who have space to properly operate their weapons.

Now their cavalry, which has destroyed the opposing horses, have arrived at the back of the Roman army and the final side has been secured. Varro’s legions are now trapped, and with a high depth of organisation, there is virtually no space to move people around or efficiently fight at the front. Chaos ensues.

Finally, almost every single man is killed. Using an average of multiple different sources, the estimation is that casualties reach sixty thousand, but possibly more. 10% of Rome’s population is lost because of the Battle of Cannae.

Despite Hannibal’s insane victory and Varro’s crushing defeat, Hannibal just does not have enough resources left over, or the ability to supply enough power, to directly attack Rome – and his delay proves fatal. Rome quickly reorganises their armies and take their revenge on the Carthaginians at the Battle of Zama, led by Publius Cornelius Scipio Africanus. Saying that the Carthaginians “broke the truce”, he leads them into Battle and destroys Hannibal, with losses on the Carthaginian side eight times as many on the Roman side.

This time, Hannibal has the disadvantage in cavalry instead and Scipio pulls his armies apart to let the war elephants run past – making them absolutely useless. The Battle of Zama was the last decisive battle for Carthage, and the end of the Second Punic War.

Hi there! I hope you enjoyed today’s blog post. If you did, tell a couple friends about it! And if you don’t want to ever miss out, sign up for my email newsletter by clicking the link up there ^^^