What image comes to mind when you think of Medieval feasting? Roudy men getting outrageously drunk and people flinging bones all over the floor? Surely most people imagine this.

However, you are wrong. In fact, it could hardly be further from the truth, as good courtesy and politeness was expected to be practised diligently at any Lord’s dinner. There was actually quite a specific set of manners, and when you consider the lists of rules which we can accumulate from reading original texts from the Middle Ages, you might conclude that eaters from 500-1700AD were a lot better behaved than today. And that really goes against all common belief.

So here is my written outline of a medieval dinner, from your view as a visitor to a noble man. I hope you enjoy today’s post as much as I enjoyed learning about it.

You have arrived at the Manor House. Required to greet your invitor with kindness and gratitude, you follow the servants’ lead to a room where other people are waiting to be led to their specific seats.

Yes, it wasn’t for you to choose. Sometimes it was down to the Lord’s discretion, but often you would be organised by rank of importance, or whether you were crucial to furthering and promoting your master’s ambitions.

You sit down at the table. A bowl of washing water is carried to your place – this is for your hands. One of the most rude and disgraceful acts you could commit at a medieval table is refusing to wash them.

If spoons are needed, these will be counted out by the chamberlain, who will ensure that he receives every one back. Spoons are quite special and only needed for special purposes. 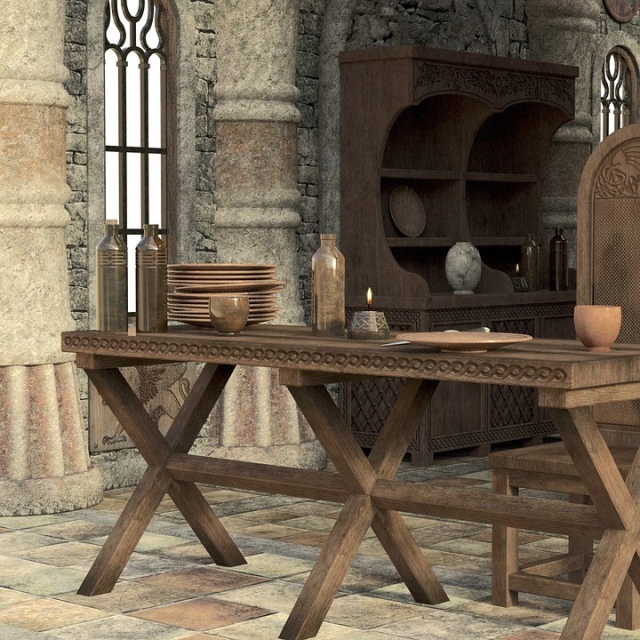 Oh, and by the way, you’ve lost your chance to use the… latrines. You must now wait until after the meal.

You get placed next to a lady. That means you won’t be able to laugh rudely or make jokes. Also, you should know that you can’t make any explicit expressions or silly faces. This is a horrifying offence. Don’t do it.

Forks didn’t exist in medieval times. Actually, they probably only appeared around the Tudor times and the Reformation. Instead, you bring your own knife with you. This one is hung around you neck, but if you look, I think you’ll find most women have it up the sleeves.

That’s a dog underneath the table. Be warned, however, that you cannot under any circumstances, feed them. They themselves are expected to behave to the best of their ability.

You came with a greasy mouth, so you politely wipe it with your napkin. Nice – that’s good conduct.

2. The Wine Is Poured

A servant leans over your shoulder and proceeds to pour wine into your goblet. You remember that you can’t touch your cup while eating, rather you must finish what you’re chewing, wipe yourself with a napkin and hold the goblet carefully. Unfortunately, you forget to be careful and spill a tiny drop into your lap. Someone glares at you across the table. Please don’t do that again.

Sharing a cup at a medieval table wasn’t very uncommon. You would have to hold the goblet with two hands.

3. The Food Is Served

You would almost never be served up food individually. Personally, I don’t think the meal-per-person concept existed at all until much later. Dishes would be laid on the table and you could serve yourself.

Finally, all the food is put down on the long table and the chamberlain enters. He praises/blesses the food and conducts a prayer, which everyone is obliged to go along with.

Before you rush in, ensure you let your neighbour get food for themselves, and definitely don’t pile your plate high with an assortment of items. Don’t give food from your plate to them unless they give you direct permission.

Making sure to only take small bites and to chew carefully, you begin to eat. Two important rules include not talking with your mouth full and throwing half chewed food on the floor, but you realise that these manners are regularly ignored anyway.

Eating food was done by stabbing food down with a knife and then pulling it off with the fingers to consume. Sauces must also be gotten by dipping your knife in them. 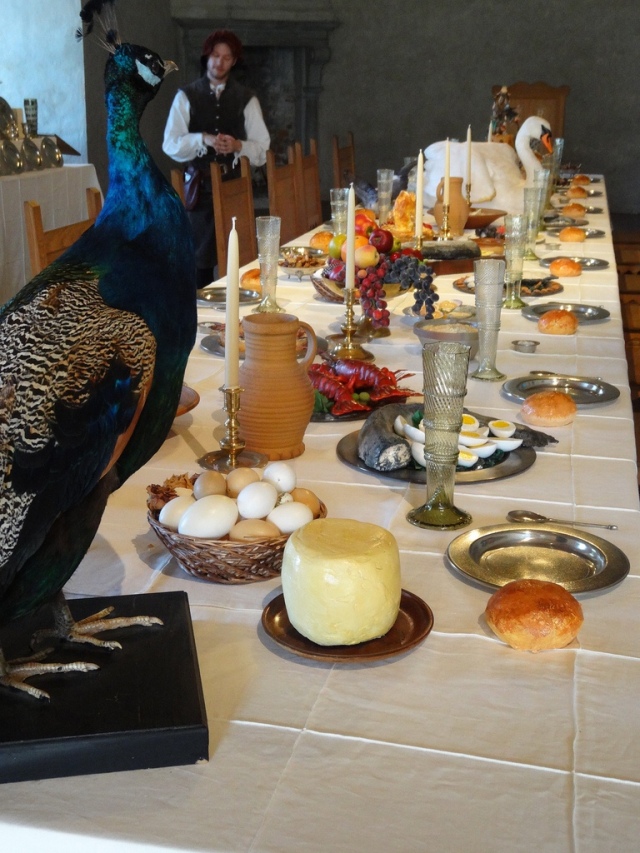 If you want to pick your teeth with your knife, then you just can’t. Sorry about that. Feeling sick? Leave the table to throw up.

Looks like you’ve finished your food pretty quick. Before you start to gnaw the last bits of that bone, stop, and show respect to other eaters at the table. This is another thing you are forbidden from doing.

Food was prepared in a hidden kitchen connected to the dining hall, and if you were in the King’s kitchen, you’d observe ovens big enough to roast multiple pigs/boar/oxen at a time.

Dismissal could vary very much from Lord to Lord, so you could really go from eating to any other activity, but it is crucial that you keep in mind the need to thank your host when you leave. Well, you’ll probably forget after your fifth cup of wine. Oh well.

Ok, thank you very much if you’ve read this far! I’ve heard longer posts are better friends with search engines, so I spent quite a bit of time on this. It was interesting to write, and I hope you now have the set of knowledge to be a legend at medieval dining.

If you have anything to contribute, leave it in the comments below, and that’s all. See ya soon.